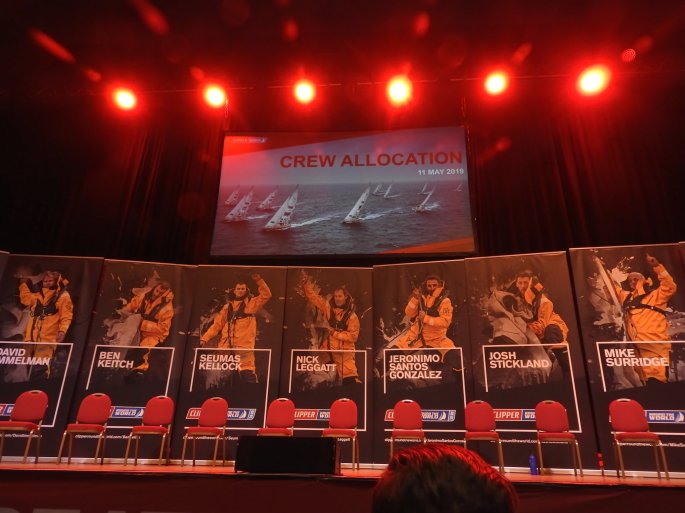 …After two years training in the dark I now know my team!

I’ll be representing Uruguay in the Clipper Round the World Yacht Race 2019/20 under command of a Spanish Skipper, Jeronimo Santos Gonzalez. This is Jeronimo’s debut in the race and also Clipper’s 1st Spanish Race Skipper, as well as being Uruguay’s debut into the race sponsoring a yacht – Punta del Este. All these debuts mirror my own into sailing and certainly amuse me.

I love the sentiment from the Commodore of Yacht Club Punta del Este to the team: “Prepare yourselves for the challenge, be a good companion, help each other, do your best to win, and enjoy – because, after all, that is why we are alive.” Wise words and they certainly match my own values and hopes in this race of my life.

Now it’s time to learn some Spanish (in addition to learning how to sail) and for all 64 crew to pull together as a team, despite hailing from 14 different countries, and decide on a team song – for our podium wins of course! 😉

To see all the crew racing aboard Punta del este see:
https://www.clipperroundtheworld.com/team/punta-del-este/race-crew

Although for me the big news of the day was finding out which team and skipper I had been assigned to, so that I could develop my own team spirit, another crucial bit of information all crew and their supporters were waiting for was when the race would actually start and from where. I can now announce that St. Katharine Docks in London will be the location for the official race start and end.

The eleven strong fleet of 70 foot ocean racing yachts will be berthed in the docks’ Centre Basin for a week-long event from 24 August 2019, before they depart for their 40,000 nautical mile circumnavigation on 1 September 2019.  This means you can all expect to see me and my team sail home into the docks in early August 2020; I really hope to see you there cheering us in.

This time tomorrow I will be one of around 700 expectant crew gathered from around the world in the Guildhall at Portsmouth to hear the news I have been waiting for since I applied to this race 22 months ago…which Skipper, yacht and team I have been assigned to, as well as which ports we will visit during the race and when the race might actually be scheduled to start. All key information, which once we are informed, will make this race very, very real …and exciting! I could hardly sleep last night for the anticipation.

As I head off to Portsmouth later today I will be reflecting on my responses to the questions we are required to address prior to meeting our team tomorrow. Big questions that ask each crew member to articulate their fears, expectations, measures of success and motivations for their part in the ocean race, so that each Skipper can begin developing their team’s race campaign tomorrow afternoon. I noted that 99% of my personal responses to my fears and anxieties about the race, my personal objectives, measures of success in the race and expectations of myself and others all focused on the relational, interpersonal aspects of ocean racing. I wonder what that say’s about me? I also noted that right now, in the lead up to the race, being on the winning team would be a bonus, because I value good team spirit and crew relations on board more than winning. Tomorrow I might be challenged on that by my Skipper and fellow team mates and my values may change as the race campaign gathers momentum…only time will tell!

For anyone reading this living in the vicinity of Portsmouth, there will be two Clipper 70 racing yachts moored at Gunwharf Quays so that anyone can step aboard and see for themselves what life aboard will be like for the race crew.

Bring your friends and family to tour above and below deck. See what a stripped-out 70 foot ocean racing yacht is like and imagine life at a 40º angle. It’s free to tour, but donations are welcome in aid of Unicef. You can tour the yachts at these times: Saturday 11 May 1000-1900 and Sunday 12 May 1000-1700. Remember to wear flat shoes though!