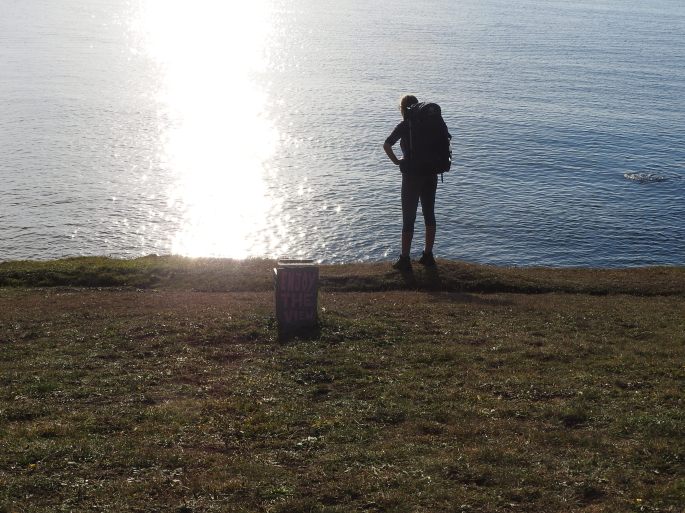 Around the globe, humans have been having to establish, learn or re-define their boundaries due to the impact of the pandemic. ‘Social Distancing’ entered our lexicon and we grew fearful of being in close, physical proximity to each other. The boundaries between what’s ‘mine’ and what’s ‘yours’ became amplified, and our work/home life boundaries crumbled.

For the last 14 years I have worked from home, but I also found this new order of working from home and always online very difficult and exhausting. Like so many others, the geography of my physical movements has shrunk whilst the time I spend online has expanded enormously; an observation that deeply worries me.

Then there’s the dubious neoliberal agenda promoting ‘wellbeing’ and the rather annoying emails I get from my employers ‘wellbeing team’ reminding me to take a break from the computer, go for a walk, share my woes with a colleague over a virtual coffee break or ‘water cooler moment’. Oh dear! If this is the future, I want none of it. It would appear that the onus is on us as ‘individuals’ to create and maintain effective boundaries in all aspects of our lives, be they real or imagined.

As you can probably tell, I have been mulling quite a bit on boundaries, whilst at the same time, being utterly ineffective at creating any useful ones of my own during this bewildering global pandemic.

Nevertheless, it amused me when I looked back at the photos of outdoor adventures I’ve undertaken this spring and summer, that they’ve all involved boundaries of some kind; predominantly physical land-based boundaries – coastline/shoreline, riverbank, dyke – and all geopolitically and culturally contested throughout human history.

What follows is a homage to the seemingly self-evident concept of a ‘boundary’ and the boundaries I have trodden or sailed this summer; the activities themselves being effective boundary markers separating my urban, daily work life from precious moments under bigger skies.

A boundary between sea and land.

This hike was inspired by reading Raynor Winn’s Salt Path over Christmas in 2018. I made a note back then to put it on my ever-growing hiking list.

Turns out all we had to do was follow the acorns for 103 miles of rugged coastline, often in what the Cornish refer to as ‘mizzle’ (mist and drizzle), which completely obscures the way ahead, saturates everything and gives rise to a sense of gloom rather quickly unless a café is chanced upon in which to revive spirits over a pot of tea and a Cornish pasty. For 3 days we were accompanied by the mournful sound of a fog horn belonging to Lizard Point light house. It became strangely meditative to walk to.

This hike was undertaken to mark mine and my husband’s joint birthday. We hadn’t made any plans other than we each stowed a birthday card to the other somewhere deep inside our rucksacks and sealed in waterproof sandwich bags. But strangers we met at a campsite the night before our birthday had other plans! They surprised us on our birthday morning by seeking out our tent amid the throng of families camping in huge, lit up tents around us, to announce they’d bought us tickets to see Fisherman’s Friends perform that evening at the iconic Minack theatre! All we had to do was walk the 8 miles to get there in time for a magical performance against a setting sun over the sea. It was made all the more incredible because it was our first live performance since the pandemic began. Thank you to Nigel and Fi (assuming you’re reading this) for making our birthday forever memorable!

Walking the SWCP around Cornwall, gave me a very different perspective on this divided county. I was expecting twee fishing coves, lots of ‘I saw you coming’ pricy gift shops, idyllic beaches, blue skies and dolphins. What we encountered was altogether wilder. Dramatic outcrops extending from heath and moorland. Brooding, stormy skies, so much ancient and industrial history… and absolutely no dolphins! It was a wild Atlantic shore, and Cornwall is all the better for it in my opinion.

We met an inspiring man from Newcastle whose living one of our dreams. He’s walking around the entire coastline of Britain (and has retired early in order to do so). He impressed me with his energy and ability to make VERY early starts and walk long hours on little food. You can follow his journey here.

Under sail: A weekend getaway aboard the Brixham Trawler, Pilgrim (1st -3rd October 2021).

I came to sail aboard Pilgrim in a reaction to the onset of autumn, which always makes me twitchy for one last swim, one last night in my tent, one last hurrah to summer basically. The idea of getting away for a weekend sail was hatched whilst hiking around Pendeen on the South West Coat Path as I would occasionally glimpse a traditional sailing vessel off the coast. I chose to sail aboard Pilgrim because she’s a boat I know of, I like the fabulous colour of her sails and ‘Pilgrim’ seemed apt, since I was very much stepping aboard in the spirit of pilgrimage.

I embarked very mindful that this would be my last opportunity to head offshore this year, and also painfully aware that at the time, absolutely no resolution had been reached with the aborted 2019/20 Clipper RTW yacht race. So it was very ironic (or do I mean bittersweet?) to discover that one of the 2019/20 Clipper crew I had trained with in 2018, had not only been able to complete his part in the race before it got ‘postponed’, but he was now a committed member of Pilgrim’s crew!

Borderlands. An area near the line separating two or more areas.

Ever since I moved to Bristol in 2011 I have wanted to hike the Offa’s Dyke Path, but had always been fearful to do so. I would second-guess my ability to walk the terrain and distance and was scared by the remoteness of the path. But having cut my teeth into this long-distance walking malarky and having proven to myself that my husband and I were fit enough and could each carry around 15 kilos of gear, we decided to mark our 9th wedding anniversary by finally setting off. Where hiking the Coast-to-Coast the year before felt like an exciting adventure, and the South West Coast Path a bit of outdoor fun, the Offa’s Dyke proved to be an arduous slog!

The Offa’s Dyke (Clawdd Offa in Welsh) is a linear earth work that roughly follows part of the border between England and Wales. It was the creation of King Offa – a powerful ruler of the Anglian kingdom of Mercia in the 8th century – a defensive boundary between his domain and the Welsh kingdom of Powys. It consisted of a ditch and rampart and in its intact, original form, two metres wide and eight meters in height. King Offa was a busy man creating all sorts of things to assure his place in the history books, including establishing the penny as England’s standard monetary unit, and hence the logo depicted above, used for the Offas’ Dyke signage; King Offa depicted on the penny.

The Offa’s Dyke is both very significant to the history and culture of ‘border country’, whilst also seemingly undervalued as a national trail (evidenced by the neglect of the path, sabotaged signage, lack of services for walkers and at times, open hostility from landowners). So, I am really pleased to learn that since 2020 some academics have begun a research journal dedicated to this very special British earthwork – the Offa’s Dyke Journal (ODJ) – sponsored by the University of Chester and the Offa’s Dyke Association. The ODJ is:

…The first and only open-access peer-reviewed academic journal about the landscapes, monuments and material culture of frontiers and borderlands in deep-time historical perspective, the Offa’s Dyke Journal (ODJ) has a concerted focus on the Anglo-Welsh borderlands…

You can read the first issue here.

It was only because of the hospitality and support of my dad and his partner, and later my aunt, (all of whom live along the Anglo-Welsh border) that we could reach Prestatyn at all. Prestatyn marks the end/beginning of the path and the shores of the Irish Sea. It took us two gruelling weeks of bleeding, infected blisters and rain to cover the 178 mile route. That said, I loved the archaeology and the Clwydian Hills are absolutely wonderful; I highly recommend them.

A large natural stream of water flowing in a channel to the sea, a lake, or another river.

The River Wye is the fourth-longest river in the UK, stretching some 250 kilometres from its source on Plynlimon in mid Wales to the Severn estuary. For much of its length the river forms part of the border between England and Wales so we had walked some of its banks 2 months before when hiking the Offa’s Dyke Path. We’d returned to the area to try to make our peace with the path and the traumatic events that had occurred. Unlike walking, canoeing is very soporific, even in wet weather. We allowed ourselves to be lulled along catching sightings of egrets and herons, whilst reflecting on the fact we’d walked the imposing ridge on our right only weeks before with heavy packs and weeping blisters, covering 18 miles from Pandy to Hay-on-Wye along Hatterall Ridge in the Black Mountains.

A road, track, or path for travelling along.

A pilgrimage is often understood in anthropological or ritual terms as a path of purification. I felt I badly needed a ritual of purification to rid myself of the trauma and very bad vibes I’d acquired from witnessing a suicide whilst walking the Offa’s Dyke path only a few weeks before.

Mountaineers and climbers often understand their ascents as sacred acts in which the summit is a metaphorical, indeed physical, gateway to another realm. For me, a walking pilgrimage is a sacred act to another realm, often inward, and in the case of Glastonbury, the Tor is a very visible destination that all faiths and none can relate to.

I undertook this day pilgrimage with the British Pilgrimage Trust and met some really interesting pilgrims that day. Quite a few of them had walked the same long-distance paths I had undertaken over the last two years, and a few of them recommended paths I’d not heard of, for future hikes.

The day was everything I needed as the founder of the charity, Dr Guy Hayward, led us from church, chapel, holy well, sacred spring, ancient tree, tor and to earthworks and boundary markers that have been honoured for centuries, indeed millennia, in folklore and custom across many faiths.

Little did I know that day, that 3 months later I would receive intensive training in order to devise and recce my own pilgrimages as an official ‘Pilgrim Guide’ for the British Pilgrimage Trust! As I type this, I am putting the finishing details to an itinerary for a day pilgrimage in the Black Mountains that I intend to guide in March 2022. The route incorporates an ancient church, holy well, iron-age hill fort, a wishing tree, and starts and ends at a dead-end road high-up in the Black Mountains. It’s an ancient and remote area. I love that my mobile phone receives no coverage for the duration of the route. Quite apt for a pilgrimage I think. The pandemic may have dictated that I observe physical boundaries this last year or so, but my mobile phone has the last laugh and reminds me that there are many unseen boundaries to explore yet.